With the release of Micronaut 2.0 M3, we have gone live with a brand new implementation of the Micronaut command line interface (CLI) and Micronaut Launch, an online tool for creating Micronaut applications.

When the Micronaut framework was first being developed, we knew we needed a tool to generate applications that allowed users to get up and running writing code without having to worry about how to configure their builds and what the dependency coordinates are. Because the Micronaut framework relies on compile-time processing, the build setup can be slightly more complicated than a simple Java application.

The Grails framework has a CLI that allows users to do just that, so we decided to fork it and copy the code into the Micronaut project. This allowed us to create a CLI with only a small amount of time required on our end to get working.

Over time, we discovered that the forked CLI could not meet the Micronaut framework’s needs. The Grails CLI was designed to create Groovy applications built with Gradle and tested with the Spock testing framework. Because the Micronaut framework currently supports all combinations of Java/Groovy/Kotlin, Junit/Spock/KotlinTest, and Maven/Gradle, the number of combinations is significantly greater than what the original CLI was designed to handle.

In addition, the old CLI had several other shortcomings that we wanted to address:

Leveling Up the CLI

For Micronaut 2.0, we decided it was time to rewrite the CLI in Micronaut itself (eating your own dog food, if you like) using PicoCLI. We also wanted to make it possible for the CLI to be deployed to more environments than just the user’s terminal.

So with that, we created Micronaut Launch, which is now one of the coolest projects in the Micronaut ecosystem.

Micronaut Launch features a core written in Micronaut itself and a micronaut-cli module that targets the user’s command line and uses PicoCLI.

The micronaut-cli module uses GraalVM Native Image to allow us to produce distributions of the CLI that target Linux, MacOS, and Windows natively.

Using the new CLI, you can create Micronaut applications offline or in areas of limited connectivity using a distribution that suits your platform, and thanks to GraalVM Native Image, it is lightning fast.

The new CLI features more or less the same commands as Micronaut’s old CLI, but is much more optimized and fully operable offline. We have also added a few new features, with one of the coolest being the ability to display a diff of the changes required to add a new feature to an existing application: 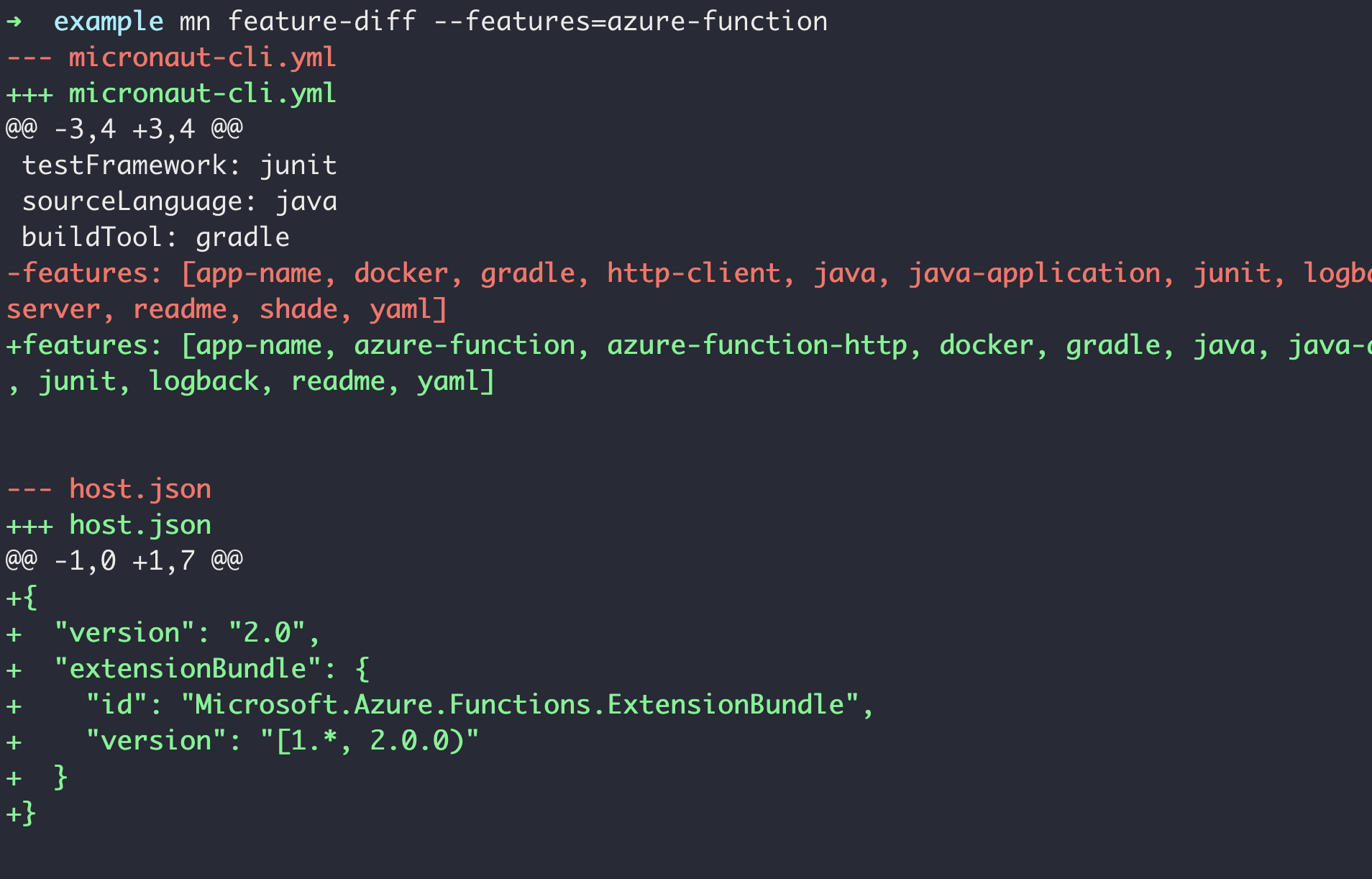 To allow users to create Micronaut applications via the web without installing the CLI, a starter-api module was created that defines the API and uses Micronaut’s compilation-time OpenAPI (Swagger) specification generation.

The starter-api module is then used in a number of different subprojects to allow running the API on different environments, including:

It is a testament to Micronaut 2.0’s flexibility that you can take the same application and run it across serverless platforms (Lambda, Azure, Cloud Function, Cloud Run) and also build a regular Netty or Servlet application from the same codebase.

It also provides users maximum flexibility if they wish to run their own version of Micronaut Launch for internal teams since you can now choose whichever platform (Serverless or not) that suits your needs to deploy Micronaut Launch to.

The API is also accessible via CURL using https://launch.micronaut.io 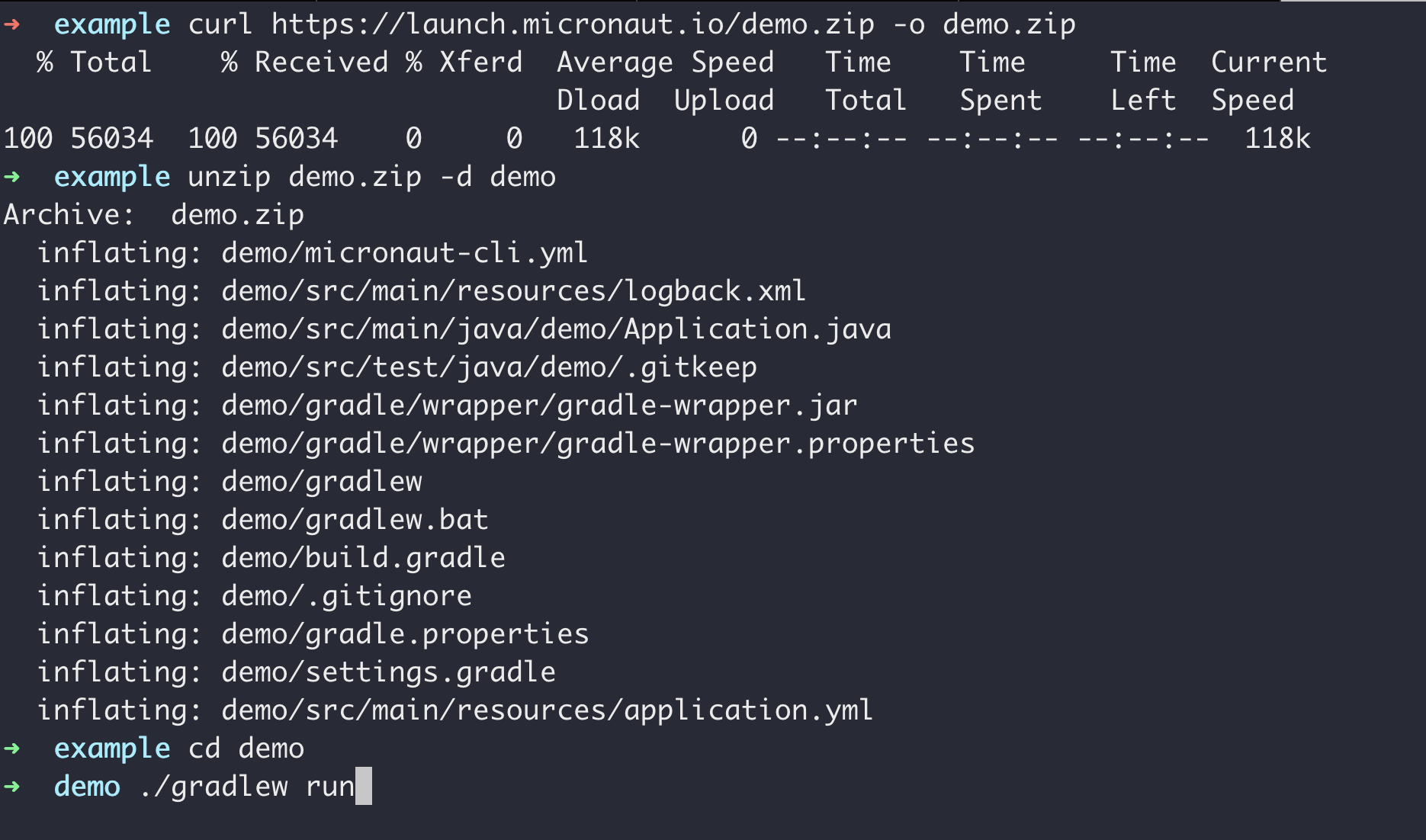 The Micronaut Launch UI is written in React and demonstrates the power of the Micronaut community. Our thanks go out to Francisco Javier Delgado Vallano, and Miguel Ángel Quintanilla from Profile in Spain, who built the first version of the UI based on the OpenAPI specification we provided: 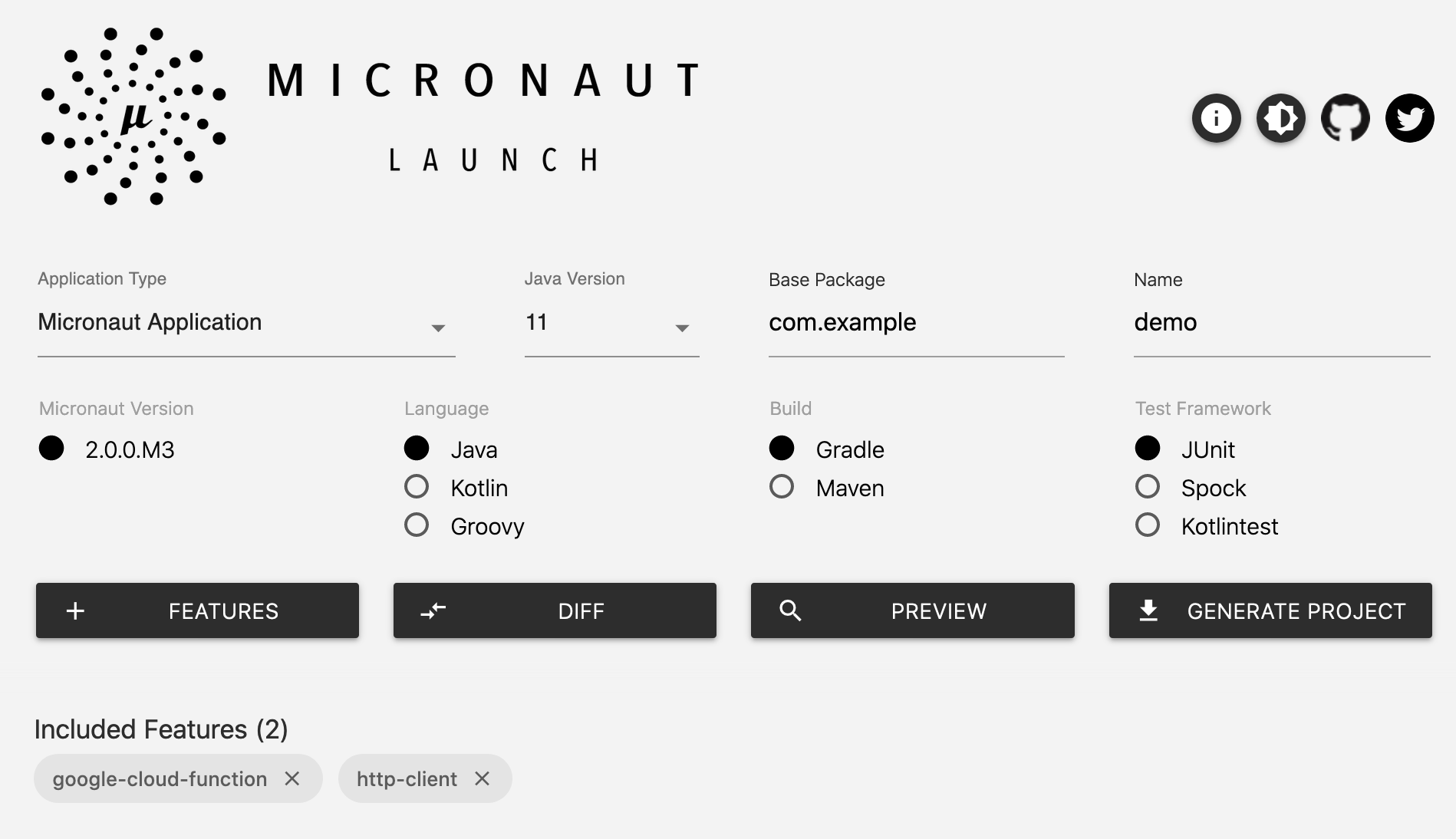 The Micronaut Launch UI includes some awesome features such as: 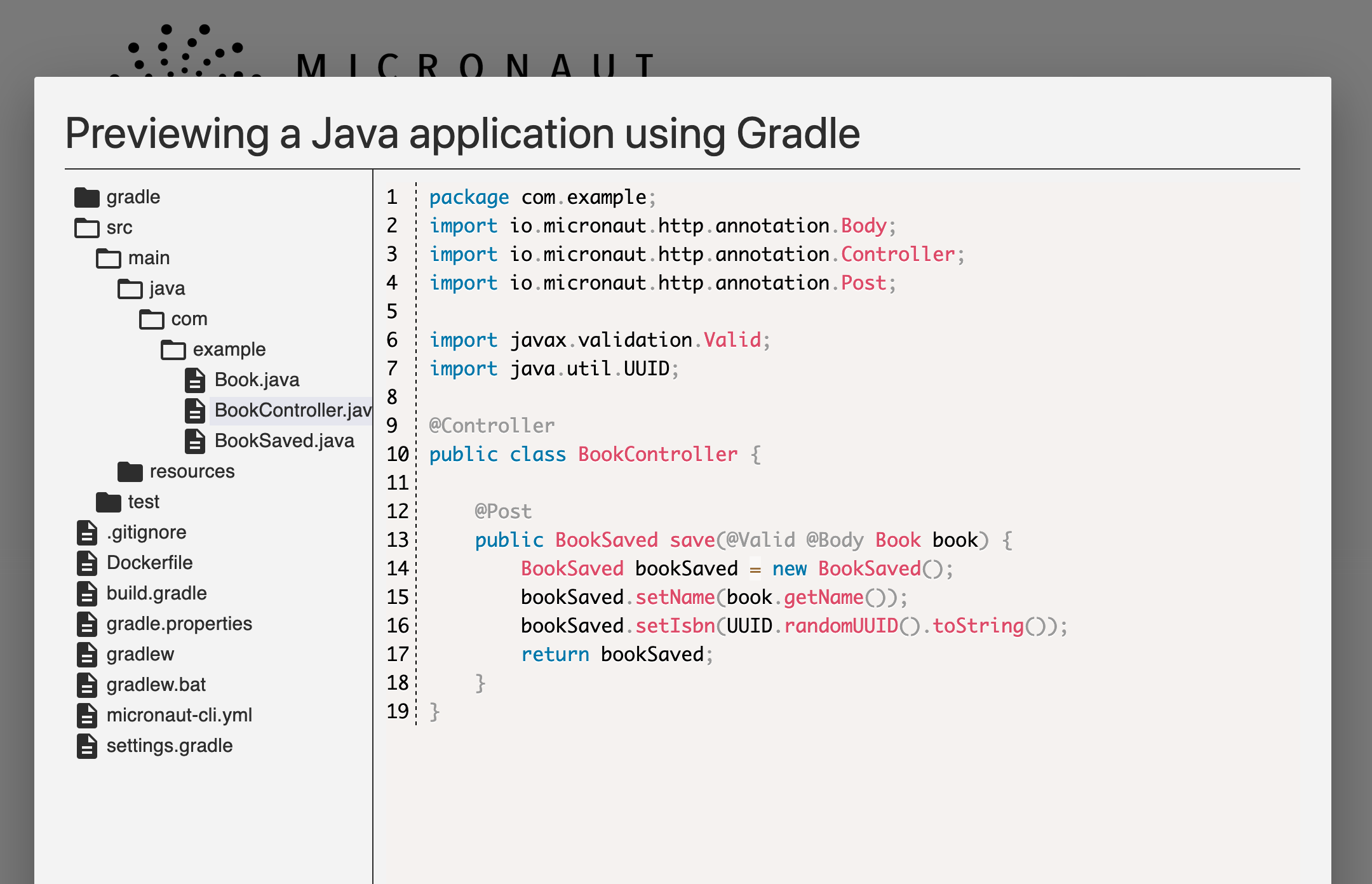 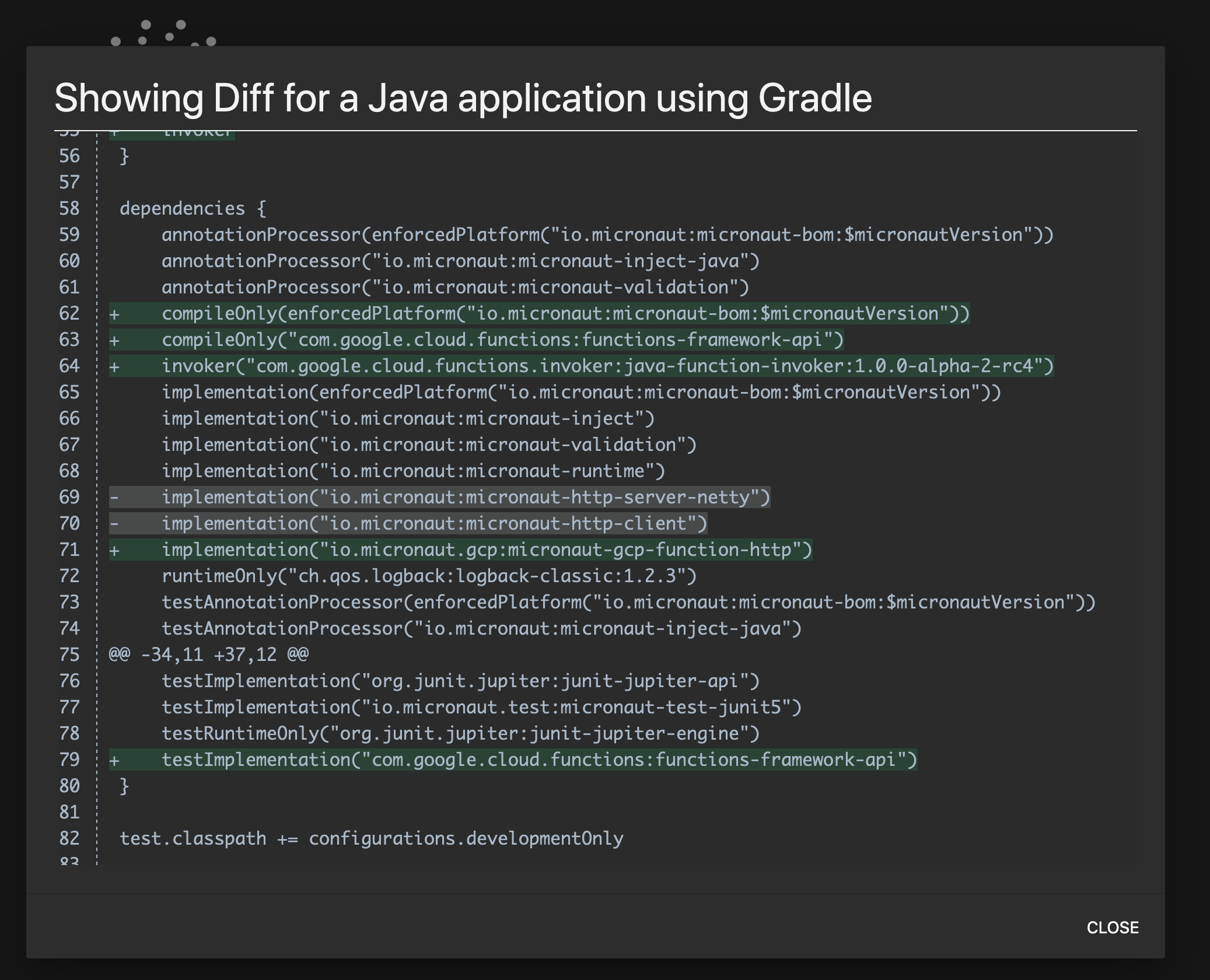 Micronaut Launch is a fantastic example of modern application development using Micronaut. The application leverages GraalVM Native Image to optimize both the CLI for each platform and the API in order to fully take advantage of GraalVM’s outstanding cold start performance for CLI applications and Serverless.

Micronaut Launch also utilizes several of the great features we are building in Micronaut 2.0 including improved support for Serverless platforms such as AWS Lambda, Google Cloud Function, and Azure Function.

Let us know what you think!