Micronaut 2 includes many improvements to help you write Micronaut applications and serverless functions and deploy them to AWS Lambda.

In Micronaut Launch, you can select the feature aws-lambda for applications of type Application or Serverless Function. Those application types have their CLI-equivalent commands.

To deploy an AWS Lambda function, you have to:

The above decisions influence the type of Micronaut application you choose. 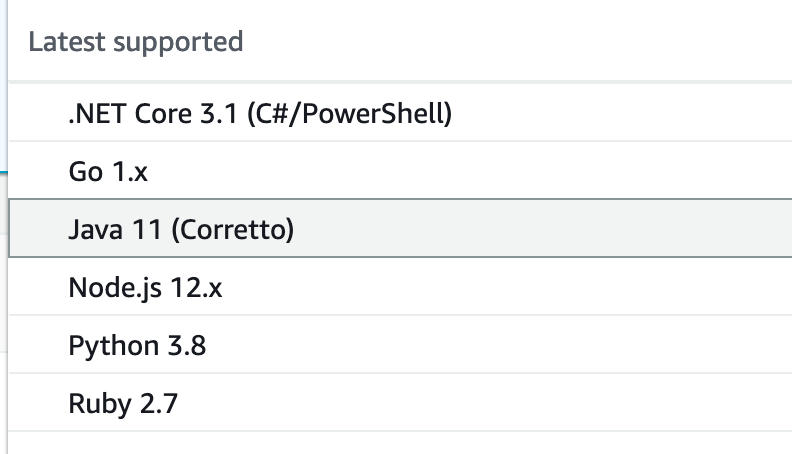 Depending on your application type and runtime, you need different dependencies:

The previous set of artifacts have a group id of io.micronaut.aws.

Micronaut CLI or Launch will include the necessary dependencies when you select the aws-lambda feature or both aws-lambda and graalvm features.

Choose How Your Lambda Is Triggered

AWS Lambda integrates with other AWS services to invoke functions. The Micronaut application type you select depends on the triggers you want to support. To respond to incoming HTTP requests (e.g. AWS Lambda Proxy integrations in API Gateway), you can choose either Application or Serverless Function. For other triggers, such as consuming events from a queue or running on a schedule, choose Serverless Function.

On the one hand, if you need to support a single endpoint, a Serverless Function gives you a function with less code (which translates to a faster cold startup).

Functions written as an application of type Application allow you to code with a more familiar paradigm — classes annotated with @Controller. This is possible because, through the micronaut-function-aws-api-proxy dependency, Micronaut integrates with the AWS Serverless Java Container project.

Your Lambda function’s handler is the method in your function code that processes events. When your function is invoked, Lambda runs the handler method. When the handler exits or returns a response, it becomes available to handle another event.

The aws-lambda-java-core library defines two interfaces for handler methods. When coding your functions with Micronaut, you don’t implement those interfaces directly. Instead, you extend or use its Micronaut equivalents:

For functions of type Application, use the handler io.micronaut.function.aws.proxy.MicronautLambdaHandler.

To resolve that class, add the micronaut-function-aws-api-proxy dependency to your build.

To resolve those classes, add the micronaut-function-aws dependency to your build.

With MicronautRequestHandler, it is expected that you supply generic types with the input and the output types. If you wish to work with raw streams, then subclass MicronautRequestStreamHandler instead.

Instances of Lambdas are added and removed dynamically.
When a new instance handles its first request, the response time increases, which is called a cold start. After that request is processed, the instance stays alive (≈10 m) to be reused for subsequent requests.

During the initialization phase:

The intialization phase has access to more CPU; because of that, Micronaut starts the application context and eagerly inits singletons during the intialization of the handler class.

GraalVM is a universal virtual machine that allows you to compile Java programs to native executables.

A runtime is a program that runs a Lambda function’s handler method when the function is invoked. You can include a runtime in your function’s deployment package in the form of an executable file named bootstrap.

The main API you will interact with is AbstractMicronautLambdaRuntime. An abstract class that you can extend to create your custom runtime is mainClass. That class includes the necessary code to perform the Processing Tasks described in the Custom Runtime documentation.

When you generate a project with Micronaut CLI or Micronaut Launch with aws-lambda and graalvm features, the output includes the necessary files to generate a ZIP file to distribute your functions as a GraalVM Native Image executed from a AWS Lambda custom runtime.

We have written several step-by-step tutorials to get you started: